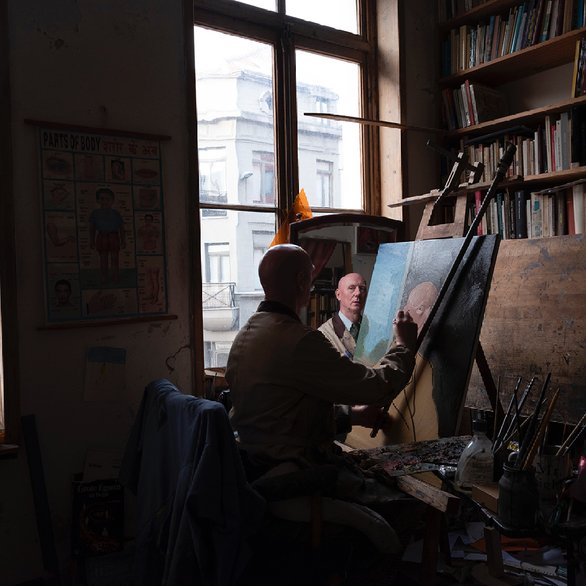 As a child (Peter van Heirseele) made comic strips, paintings, sculptures, musical instruments and wrote music to entertain his family.

He went to school at the St. Joseph Institute in Torhout. Aged sixteen, he went to the Ghent Academy for Fine Arts. He didn’t learn anything there. His mother, the artist Odette Pannecoucke, was his best teacher.

He next went to Abertridwr in Wales, where after completing a two-year course, he became a piano tuner.

In 1980 he left for Italy. He studied restoration at the Instituto di Restauro.

Herr Seele returned to Flanders for the light.  He gradually bult up an important piano collection.

During his time at the Academy, he met his travelling companion Kamagurka (Luc Zeebroek). Their artistic paths still run parallel. They are the heirs of surrealism. Cowboy Henk is their child. They complement each other in words and images.  They exhibit together, make paintings, texts, theatre, film and radio.

Herr Seele works for Humo, De Standaard, and De Lage Landen and as an independent artist.

In 2014, Cowboy Henk won the Prize for Inheritance at the Angoulême International Comics Festival.

Herr Seele also picked up the art of painting again, in which he was already active as a child. He paints every day.

In 2013, he was the first painter allowed to paint in Cézanne's studio in Aix-en-Provence. In 2017, he painted a self-portrait every day for the whole year.

Herr Seele lives in Ostend. A Cowboy Henk / piano museum will be opened there in summer 2022.